Without realising it as I danced and sang along to Lil’ Kim’s lyrics at the age of thirteen, I had found my first feminist role model. An unlikely candidate perhaps for a Scottish Pakistani teenager, but at the time Lil’ Kim’s music perfectly encapsulated my feelings of gender-imprisoned rage, as well as delightfully shocking me with its audacity.

At that time, I had not long been dramatically freed from the terrifying misery experienced by all too many young girls and women living under strict regimes of Islamic domestic dictatorship. If I were asked to imagine the polar opposite of feminine propriety as imposed by my parents, I couldn’t have dreamt Lil’ Kim up. She got naked a lot. She rapped in graphic detail about sex, once to the background sound of a woman having a looooong, loud orgasm. And she did it all in public. In short, she didn’t give a fuck.

It’s impossible to overstate the effect this had on me. Just a year or so before, I had written – but hadn’t sent – a Valentine’s card to a guy at school I had an all-consuming crush on. Another member of my family found it, sat me down, and told me in no uncertain terms what would happen to me if my father found it. We were forbidden from talking to boys. During one of our frequent family sermons, someone else piped up, ‘but what if we’re at the train station, and a boy asks us for the time? Can we talk then?’ The answer was ‘no’. 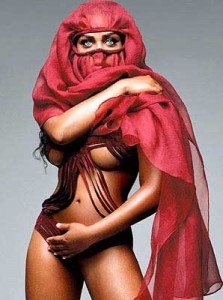 A long time has passed since those early days of freedom, and I know now that the idea of Lil’ Kim as a feminist poses all sorts of issues. Sex and violence are not the most healthy means of empowerment (although the former is debatable). I don’t believe that man-hating makes sense at all and neither does trying to emulate hugely problematic ideas of masculinity in a bid for equality. But I’ll tell you what; gaining the freedom to express who you are as a woman in such a widely public domain, no matter how unsavoury that character may be, is a striking achievement indeed. She may well be one of a thousand representations of misogynistic, hypersexualised hip-hop culture, but I for one am not going to take that achievement away from her. It’s still with a rush of adrenalin and a dash of fear that I re-post this infamous picture of her. I love it.

When I come across some of Lil’ Kim’s earlier stuff now, I can’t help but smile with nostalgia. I leave you here with one of my particular favourites, Suck My Dick – need I warn you that this is explicit material?

One thought on “Lil’ Kim, My Feminist Hero”