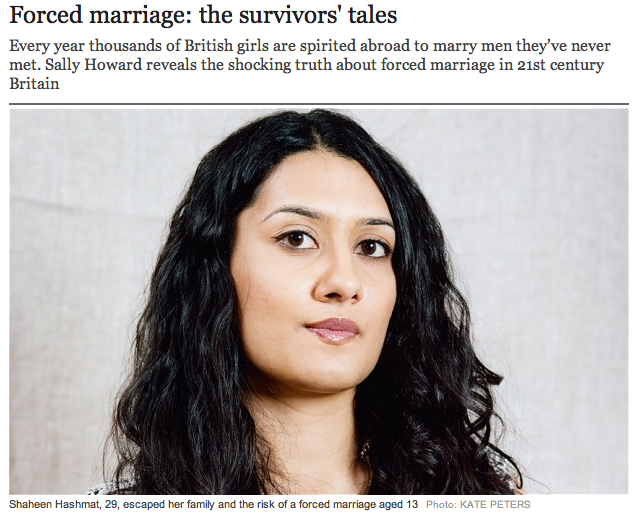 A couple of weeks ago, I appeared in The Telegraph’s Stella Magazine following the recent passing of legislation criminalising forced marriage in England and Wales. I’m incredibly pleased that victims are now protected from such abuse by the full extent of the law.

If it hadn’t been for police involvement in my own situation, I am certain that at age twelve, my so-called ‘attitude problem’ and resistance to exploitation and abuse would have landed me on a plane to Pakistan in no time – after being beaten into submission of course. The history of forced marriage in our family was strong, and affected not only the lives of its own members, but also that of one person who was brought into the family on similar terms. Although my life after escape has by no means been the happy ending I once hoped for, I still count myself incredibly lucky to have been aided by the law in the way that I was.

However, there are some activists, campaigners and survivors who are deeply worried about the possible consequences of implementing a law that they believe may escalate an already high-risk situation, where kidnap, violence and murder could occur in a very short space of time. In my case, as soon as my abusers became aware of police involvement, it was as though a magic wand had been waved. Their aggressive, threatening behaviour ceased completely (although their performance as totally baffled and loving caregivers had only just begun). With so many local authorities involved, including social workers, the Children’s Panel and an NHS psychologist, as well as the police, they knew they were being watched closely. An interdict had been taken out against them to stop them from coming for me after my escape, which was orchestrated with great care and in incredible detail. They knew nothing about what was going on until the night I left for good, smuggling out of our back window the last of my possessions that I could take without raising suspicion. On that same night, my abusers, who presented themselves beautifully to the outside world as fine, upstanding members of the community, were visited by the authorities. With their reputation and livelihood at stake, they took no action to have me forcibly returned and punished. Social services were involved for many months afterwards and although they made some huge mistakes (which I’ll go into another time), their presence kept the danger of further abuse at bay.

However, I am only one survivor of honour abuse out of many, and I know that every case is different. There are others who were glad to have avoided police involvement at all cost, because in a culture where sharing ‘family business’ with the outside world is in itself a breach of ‘honour’, just imagine the punishment for involving the law. Sadly, the reality of what happened to Shafilea Ahmed, Bahnaz Mahmod, and many others negates the need to imagine. Personally, I believe that the threat of murder indicates a greater need for effective legal intervention, not less.

The bottom line for me then, is the crucial importance of each case being entirely victim-led, and I understand from guidance issued by the Crown Prosecution Service that this is exactly what is supposed to happen (see point 24 under the heading ‘Legislation regarding Breach of a FMPO’ (Forced Marriage Protection Order):

“For a victim who does not want to pursue criminal proceedings, the option will still remain of applying for an arrest warrant for breach of a FMPO in the civil court.”

The criminalisation of forced marriage simply offers both a civil and a criminal route for helping victims out of abusive and often life-threatening situations. The law is not excessive, and those who say that elements of forced marriage are already addressed through legislation against rape, kidnapping and violence would do well to consider that those at risk might understandably not wish to suffer any of these things before feeling they can approach the police, particularly when they’re already certain about what is going to happen to them. Also, I don’t believe it’s actually considered legally possible for a parent to abduct their own child.

Domestic violence offences are and should be a crime, because abuse is wrong – why should forced marriage be any different?

1 thought on “Forced Marriage Finally Recognised as a Crime”