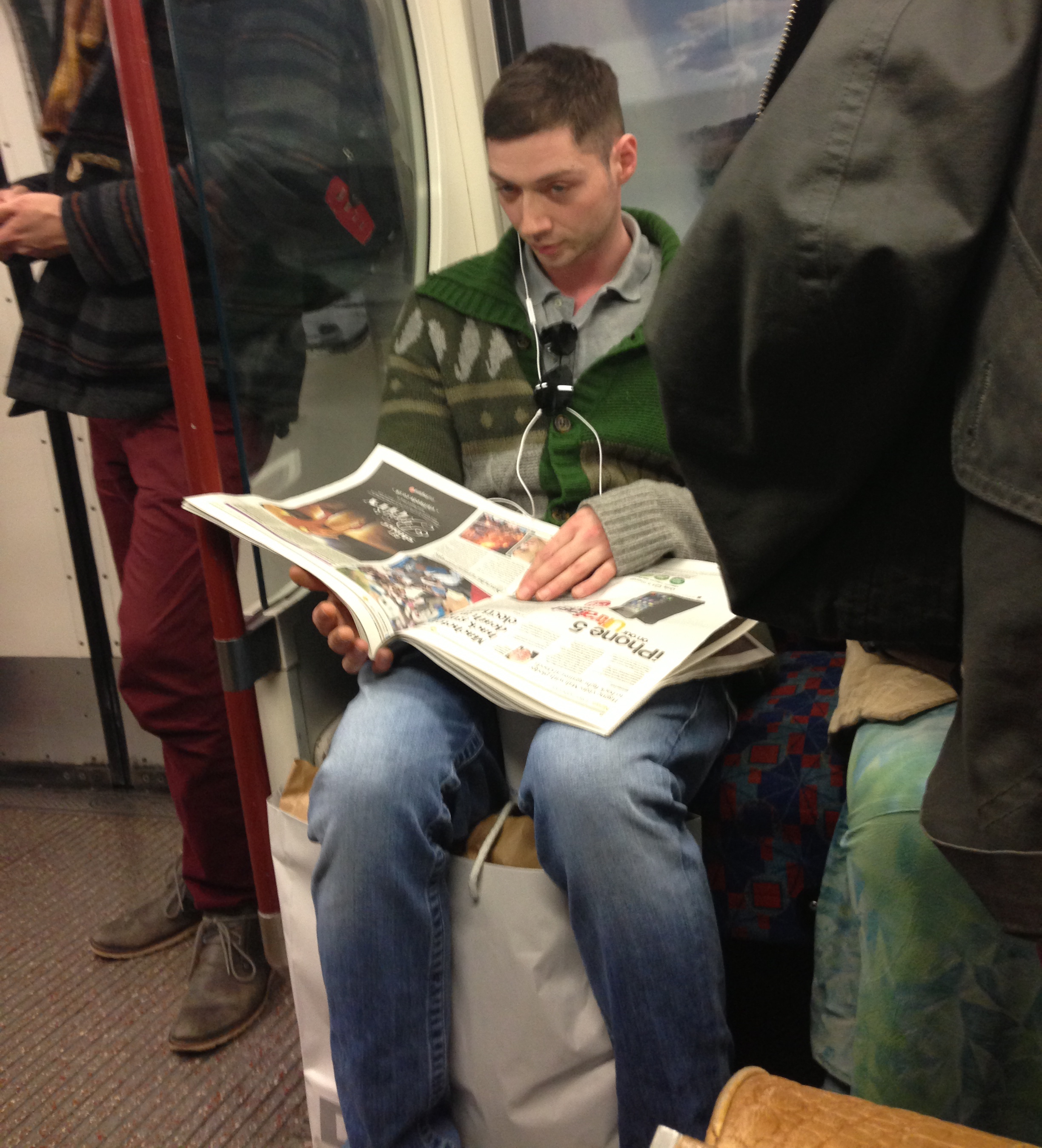 After a fairly busy, pleasant day at work, I get on the packed train home and am about to stick my music on when the arsehole above says loudly, “You better not be gettin’ off at Maida Vale, that’s all I’m fuckin’ saying, you wanna watch yourself.” Huh? I think to myself, putting it down to a couple having a domestic turned nasty or something. Then, from the young woman (French I think) along from me, genuinely scared, “I didn’t do anything, why are you saying this?”

I can’t stand it when women are clearly being threatened or harrassed in public spaces and everyone just sits in silence and does nothing, so I said loudly, “Errr, I’m sorry, was that a threat? That sounded like a threat to me.” After which the gentleman next to me piped up, “It certainly did. [then to the dude] Are you threatening these women? Because we’re all witnesses here. I’m also a barrister.” In the meantime I was talking the woman, who was with her two friends. “Is this man bothering you?” I said, and she replied, “Yes – we got on the train and it was really full and I stepped on his things but it was an accident, it was an accident!”

I turned back to the dickhead and said, “There you go mate, it was an accident, these things happen, you need to get over it and not start threatening people.” And then it began. He asked me what business it was of mine and I told him that when you make such clear threats on a packed train you’re involving everybody. He told me I needed to shut my fucking mouth and that it was none of my fucking business. I flipped and swore right back, telling him he needed to fucking get over himself, that shit happens, that he needed to sort himself out. Then he told me I was a state, that I needed a wash, that I have a ‘tache and that I should shave, that my teeth are yellow and that I have a centre parting ?????? I gave it right back. Another guy who was standing in front of me turned to me and said, “I see what you’re trying to do here, but it’s not the best way to go about it” or words to that effect. In the meantime the dude’s fucking eyeballing me and I won’t break his stare and he says, “What the fuck you looking at you fuckin’ state – you wanna have a look at yourself in the mirror you ugly cunt”

I laugh and take my phone out of my pocket and take three or four shots of him. He brings out his own phone and takes some of me. I smile for the camera. He says, “You fucking watch – you fuckin’ wait – I’m gonna spit on your face when I get off this train. You wait. Be fuckin’ ready” And then he gets back to his paper. I believe him. He’s drinking his McDonald’s drink and I just imagine him filling up his mouth and spitting at me as gets up to go. In full anticipation of this I raise my bag in front of my face as he gets up to leave, and he doesn’t do it, not believing I would have the audacity to defend myself. He stands there staring daggers at me and I know if there were half as many people on that train it would have turned violent. I peek around the side of my bag and say, “You missed.” He leaves the train. I check to make sure he doesn’t get on another carriage, and when I get off at my stop I wait ’til the train has left and everybody who is getting off has gone.

On the ten minute walk home, another guy comes up to me smiling, “Excuse me, darling, baby, can I have one minute of your time?”

“No,” I tell him curtly. His friend gets out of a nearby car and they follow me for a minute. His friend says, “Damn, she would get fuuuuuuuuucked” before backing off.

I feel tired now, and I’ve lost my appetite. People will say I shouldn’t have got involved. That you never know what people are going to do. He might have had a knife, they’ll say. Well fuck. that. shit. How many women get harrassed, groped and threatened in public spaces and other people just stand by and do fuck all? Yes I’m angry! Yes I swore back at him! I am fucking sick and tired of being expected to reign my shit in when this stuff happens, and it happens all the fucking time! Instead of telling me I need to keep my mouth shut Mr Man, why didn’t you back me up and tell the guy he needed to stop acting so threateningly? But that’s too much to ask. I’m a woman. I should sit down, stay quiet, be invisible, blend in, do everything possible to divert attention from me so that I don’t get threatened, beaten or even raped. Oh wait… Fuck you asshole.

3 thoughts on “Keep Calm and Do Nothing? Yeah Right.”